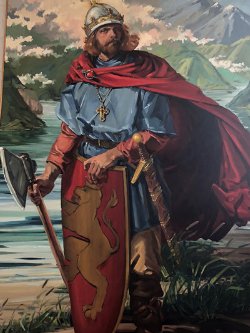 King of Norway and a martyr also called Olaf Haraldsson. He requested that missionaries be sent from England to advance the Christianization of Norway. Owing to the harsh nature of his rule, he faced a rebellion of nobles in 1029. With the aid of the formidable King Canute of Denmark, rebels overthrew him and drove him into exile in Russia. Olaf returned in 1031 but was slain in battle at Stiklestad, Norway, on July 29. While neither popular nor considered especially holy during his lifetime, Olaf was soon revered after death owing to reports of miracles occurring at his tomb. His shrine became the foundation of the cathedral of Trondheim, which was a favorite place of pilgrimage during the Middle Ages. He is the patron of Norway and was canonized in 1164.
Information gathered from www.catholic.org